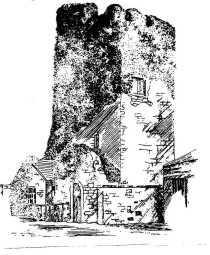 Prior to the arrival of the Dockyard, farming dominated the area with small hamlets and a few large estates with mansions.  Llanion, Pennar and Paterchurch were the main hamlets with Paterchurch occupying what is now the western part of the town.  Pennar and Llanion continue today as the two largest wards in the town, although in those pre dockyard days, the sparse population would probably have known each other by name.   The old Paterchurch name gradually petered out as Pembroke Dock became more widely acknowledged as the new town and is now primarily used for the fortified farmhouse just within the dockyard walls, which still remains as the oldest building recorded.  Other small but important hamlets were Pembroke Ferry and East Pennar, where row boat ferries crossed the water in an age when the majority of travel was still on foot.

A small hoard of Roman coins found at Pennar suggests local farmers trading with Romanised Carmarthen. In 1595, shellfish from the oyster beds at Pennar Mouth were known to be particularly "big and sweet".  "The choicest oysters" were still being fished there in 1897.  The name Pennar ("headland") is Welsh.  Like Llanreath and Llanion, it dates from before the Norman invasion of 1093. Some early shipwrights, rowing back and fore from Milford, would land at Pennar Point then walk via Llanreath to the Dockyard.  One of this route's attractions was the Dolphin at Llanreath Point. Publican Mr David Price lived to be 96, remembered marking out the Dockyard site in 1813, and sold beer "wisely diluted" - thereby avoiding fights on his premises.

Pennar farmhouse still stood "like a fort" in 1905. It was already several hundred years old.

Imble and Mead Lodge farms are still on Imble Lane beside the old shore track to Pembroke, which is now mainly just a footpath.

The quickest crossing between the medieval strong points of Pembroke and Haverfordwest was Pembroke Ferry.  "The Passage" of Pembroke's first charter (c 1180?) is by 1324 named "Penebroke Fferre".  The wooden ferryboats could carry substantial payloads. In 1500, the ferrymen had to agree to pay for damage if they failed to provide straw protecting the boat's planking against heavy loads of timber and stones.  In 1897 the boat could hold two men (rowers) and 19 Llangwm women, complete with their goods for sale in the market.  Lord Cawdor and the Castlemartin Yeomanry crossed here in February 1797, hastening to repulse the French invaders at Fishguard. That August, the Yeomanry stood guard while 200 captives were rowed out to their prison ships.  As the escort watched from Pembroke Ferry, a grateful French soldier "whose life Lord Cawdor had saved from a Welshman's blow, pulling off his hat, made two or three bows".

In 1834, rates at Pembroke Ferry were "one halfpenny for a foot passenger, one penny for a man and horse, and one shilling per wheel for carriages". By that time, rival ferries were carrying traders and workers to the new dockyard town.  Mr Huzzey of Pembroke Ferry lost a complicated law case to protect his business, and his opponents at Neyland celebrated with bonfires and fireworks. Rowboat ferries now landed at Front Street and Hobbs Point, where steam ferries also began running.  Pembroke Ferry operators sometimes took a relaxed attitude to their duties.  In 1772, John Wesley noted "The watermen were not in haste to fetch us over".

He sat on a stone and read while waiting.  As late as 1903, ferrymen were not inclined to rush their leisurely lunch at the Ferry House Inn for the sake of a solitary passenger.

Today, travellers cross near the old route - but by car, and using the Cleddau Bridge high above the original boat's course.  Some 19th shipbuilding took place in the Pembroke Ferry area where, in 1855, the coaster Pilot was launched at Mr William Allen's yard.  Nearby Kingswood and Bangeston appear in medieval farm accounts.  "Kingswood" may come from a time when the Earldom of Pembroke was in the hands of the Crown, while Bangeston derives its name from its early occupants, the Benger family. Pembroke Ferry, c. 1820. The new dockyard is to the west of the old road from Pembroke to the Passage. 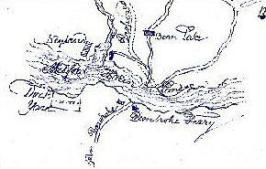 Scholars suggest Llanion may be the Welsh Lonion / Llonyon, where bees were kept, and where a church associated with St. Teilo stood.  The Meyrick family owned the substantial country house at Llanion in the eighteenth century, sometimes living there and sometimes letting it out.  By 1810 it is "till of late years inhabited by a succession of tenants but ... now unroofed and suffered to fall into decay" as nearby Bush became "the principal family residence".

Sir Thomas Picton visited the area in 1815, recruiting soldiers.  After his death a few months later, part of Llanion was renamed in honour of this popular general's last battle - Waterloo.

Fig. A tree lined avenue led from Ferry Lane to Llanion House.  The garden wall, and ruins of the mansion, still stand. 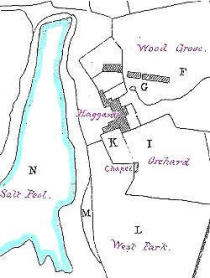 Paterchurch is first mentioned in 1289.  The medieval tower, like nearby eighteenth and nineteenth century fortifications, may have served as a lookout post.  The rooms have fireplaces and a connecting spiral staircase.  By the seventeenth century, additional domestic and farm buildings stood close by.  In 1698, goods and livestock included furniture, kitchen equipment, cows, oxen, horses, lambs, sheep, pigs, geese, ducks, poultry, wheat, barley, oats and ... a violin.  The tower now lies within the Dockyard wall, whose builders in 1844 unearthed numerous skeletons - the isolated settlement had its own cemetery, whose last recorded burial is that of Roger Adams, in 1731.  Paterchurch Tower was the centre of an estate said to stretch from Pennar Point to Cosheston. This changed hands in 1422 when Ellen de Paterchurch married John Adams.  Before the Dockyard was thought of, various sales and exchanges took place between the principal local landowners - the Adams, Owen and Meyrick families.  These left the Meyricks in control of most of the land on which the Dockyard and new town were to develop.  By 1802 the Paterchurch buildings were ruins. Although the Adams family had moved to Holyland near Pembroke, they maintained links with Pater.  General Adams, in 1833, recommended that the Defensible Barracks be built.  In 1862, a Miss Adams married Captain Loring, Captain Superintendent of the Dockyard.

Paterchurch Farm was opposite the top of Cumby Terrace until 1844.  It was also known as White's Farm after its tenants - a family descended from Thomas Whyte, the Tenby mayor who had helped save Henry Tudor's life in 1471.

Paterchurch Tower  was surrounded by farm buildings This old map includes a "chapel". The natural "salt pool" was near today's Dockyard pickling pond.

Hywel Dda CHC - Have you got a dentist?